Meeting Of State Council On Agrarian Policy Was Held In Kremlin 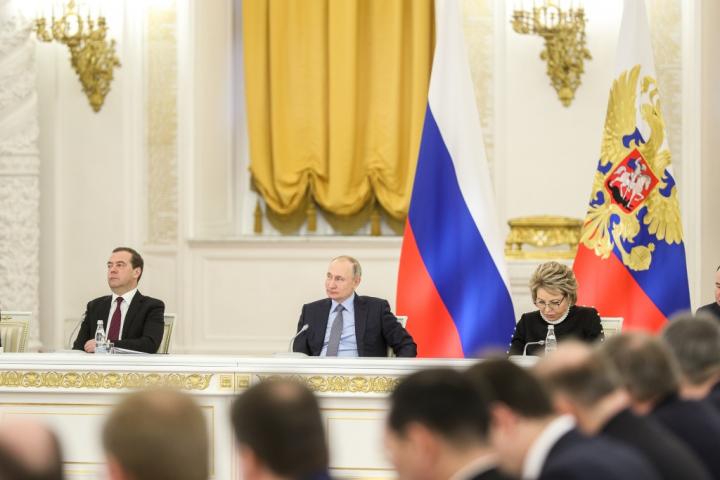 The President of the Russian Federation noted that for a number of main commodity items, Russia has already exceeded the indicators of the Food Security Doctrine. The share of domestic products in the domestic market is 99.7% with the established value of 95%. In 2019, a record crop of sugar beets, sunflowers, and soybeans was harvested in our country. “By grain, according to all forecasts, we again achieve a high result - about 121 million tons. One hundred million annual crops are becoming a steady trend. What was previously perceived as a record is the norm today, ”said Vladimir Putin.

Viktor Tomenko, head of the State Council’s working group in the direction of Agriculture, said that despite obvious successes, growth in production indicators and expansion of state support measures, a number of problems remain in the Russian agro-industrial complex, hampering the dynamics of the industry’s development. Among them are issues of increasing the efficiency of agricultural land use, optimizing the cost of acquiring energy resources, and improving taxation.

In his report, Dmitry Patrushev summed up the results of 2019 in agriculture and outlined the plans and main goals of the industry for next year. According to the Minister, agriculture is currently one of the fastest growing sectors of the Russian economy. For the period from 2014 to 2018, the growth in gross agricultural output amounted to 17.7%. Positive dynamics is also expected this year: agricultural production over the 11 months has increased by 4.1%.

Achieving this result was made possible primarily by increasing production efficiency, increasing crop yields. A significant increase in indicators was also achieved in livestock and in the processing of products. According to the Minister, the fishery complex has also achieved significant success - according to the forecast in 2019, the volume of production will be about 5 million tons.

The volume of state support for agriculture is increasing annually. In 2019, 318.3 billion rubles were allocated for the implementation of the activities of the State program for the development of the agro-industrial complex. In general, the implementation of the state agrarian policy gave a powerful impetus to the development of agriculture, over 5 years ensuring an influx of more than 2 trillion rubles of investments (excluding small businesses).

As the Minister noted, in 2019, 38.9 billion rubles were allocated to increase the competitiveness of domestic agricultural products. The set of measures to support exporters allowed this year to open markets for another 19 countries for certain types of Russian products. The export of agricultural products in 2019 will be about $ 25 billion, with a plan of $ 24 billion.

Dmitry Patrushev paid special attention to the fundamental direction for agriculture - improving the efficiency of land use. A further increase in production volumes is associated with the involvement of land in agricultural circulation, as well as with an increase in their fertility and the preservation of the qualitative characteristics of soils. Currently, the Ministry of Agriculture is preparing a separate program document aimed at improving the system of land involvement in agricultural circulation.

The development of the agricultural sector is closely linked to improving the quality of life in the countryside - in 2020, the implementation of projects will begin under the state program "Integrated Development of Rural Areas". A total of about 150 projects were selected in 47 constituent entities of the Russian Federation, of which 104 are planned to be implemented in just one year. Already in the first year of the program, changes will affect 269 settlements, where more than a million people live. The regions showed unprecedented interest in participating in state program events - the total volume of applications received by the Ministry of Agriculture for 2020 alone amounted to 132 billion rubles, which is 1.7 times the amount approved by the program passport.

For the further qualitative development of the domestic agricultural sector, it is necessary to direct efforts to increase the efficiency, productivity, quality and environmental friendliness of products. The scale of the tasks requires joint concentrated efforts of the state, business, professional and public associations in key areas. The Ministry of Agriculture of Russia will continue to work on the development of the Russian agro-industrial complex, improving the regulatory framework and measures of state support, stimulating the growth of volumes and quality of products, technological modernization of enterprises.